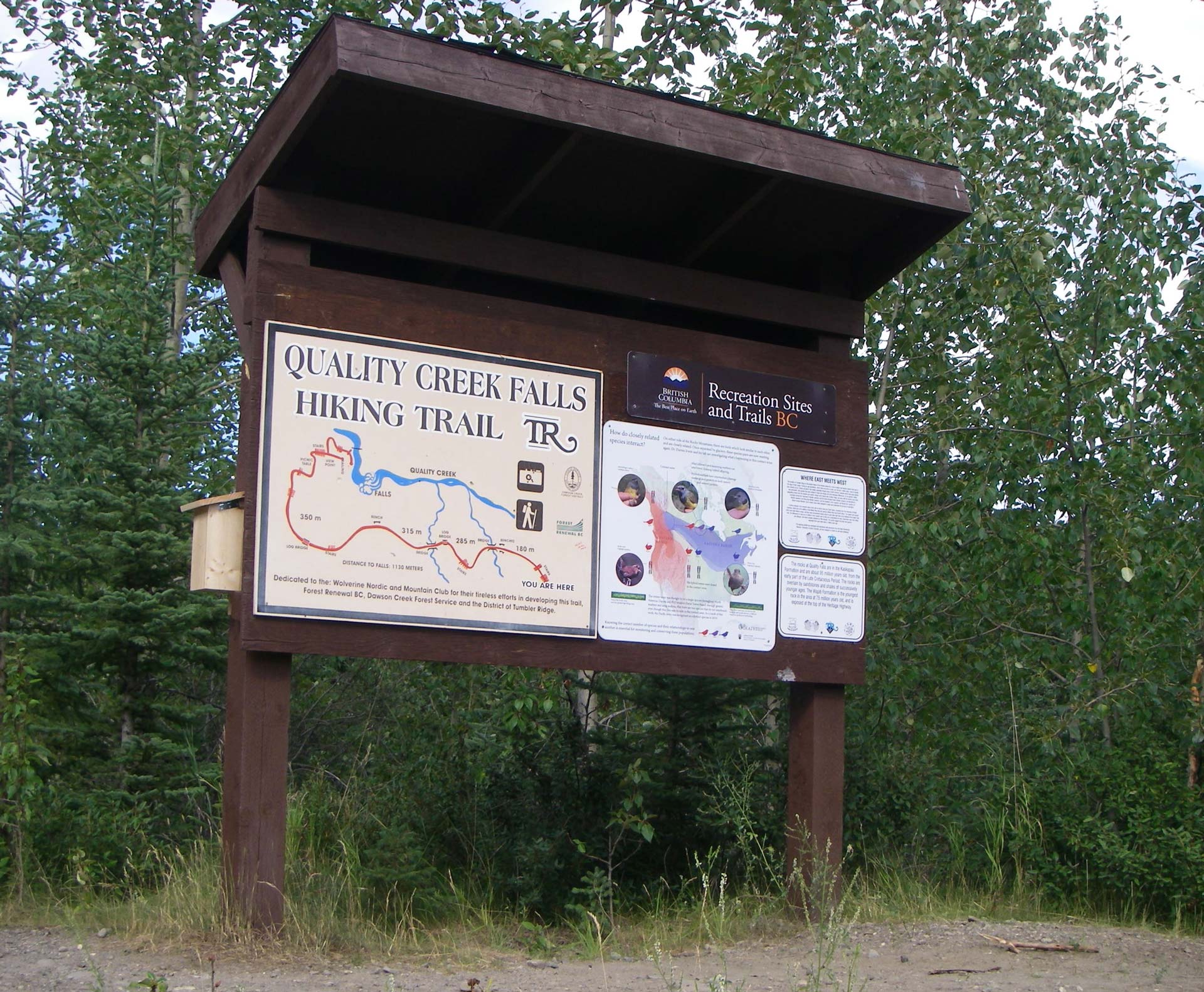 The Tumbler Ridge Aspiring Geopark aims to enhance the visitor experience in Tumbler Ridge by providing interpretive signs along the hiking trails developed over the past fifteen years by the Wolverine Nordic and Mountain Society. The trail to Quality Falls, being close to town, fairly short, relatively easy, and leading to an attractive waterfall with interesting geology, ideally lends itself to such interpretation.

What also makes the Quality Falls trail unique is the research done at this site by scientists Darren Irwin and David Toews from the University of British Columbia which led to the splitting of the Winter Wren into two species (Winter Wren and Pacific Wren). The eastern and western birds have quite distinct songs, and they were encountered singing close to each other right here at the trailhead of the Quality Falls trail. The differences in song are as distinct in this contact zone as they are in populations far away. Specimens were mist-netted and released, and blood samples obtained for mitochondrial DNA analysis. The results show that these two species separated from each other about 3 million years ago. The reason for this separation was the ice age glaciations, during which most of Canada was covered by ice.

“I am grateful to the people in Tumbler Ridge who established the Quality Falls trail, since it is where, after a long search through western Canada, I first noticed the two type of wrens singing in neighboring territories,” says Darren Irwin, a Professor of Zoology at UBC. “It meant that Tumbler Ridge was the location where east meets west, and since then we have seen a similar pattern in a number of other bird groups. I am thrilled that the Tumbler Ridge Aspiring Geopark has partnered with us to help share these findings with visitors to Quality Falls.”

Staff at UBC’s Beaty Biodiversity Museum, Derek Tan and Hana Dethlefsen, designed a poster to celebrate this exciting research. Then, in partnership with the Tumbler Ridge Aspiring Geopark, the museum allowed for its reproduction on the large trailhead sign at Quality Falls. This complements the Tumbler Ridge Museum exhibit on this topic in the Community Centre. The result is an attractive full colour 30” x 30” trailhead sign that also interprets other east-west bird pairs. Such a sign enables the Tumbler Ridge Aspiring Geopark to bring the research full circle, making the resulting knowledge available to residents and visitors right where it was initially done. “I think that the biodiversity of the Tumbler Ridge area fits in superbly with the Geopark concept,” says Irwin. “We can see the impact of the ice ages in the current distributions and traits of various bird species—this means that the birds themselves can be viewed as important geological phenomena, a key aspect of a Geopark.”

In addition, eight new signs have been installed in the area close to the falls, interpreting the geology, fossils and wildlife, and Carmen Drapeau did a great job repainting the trailhead map, which has been reinstalled. Together these additions have taken the Quality Falls trail to a new level for the enjoyment of tourists.

A Geopark involves partnerships, and this partnership with the Beaty Biodiversity Museum is a prime example of such a successful endeavor. Similar partnerships are being forged with UNBC, Simon Fraser University, Kelly Lake Cree Nation, Treaty 8 Tribal Association, and other institutions, all of which will result in benefit to Tumbler Ridge and the Peace Region as the Tumbler Ridge Aspiring Geopark’s bid to become the first Global Geopark in western North America undergoes final evaluation.