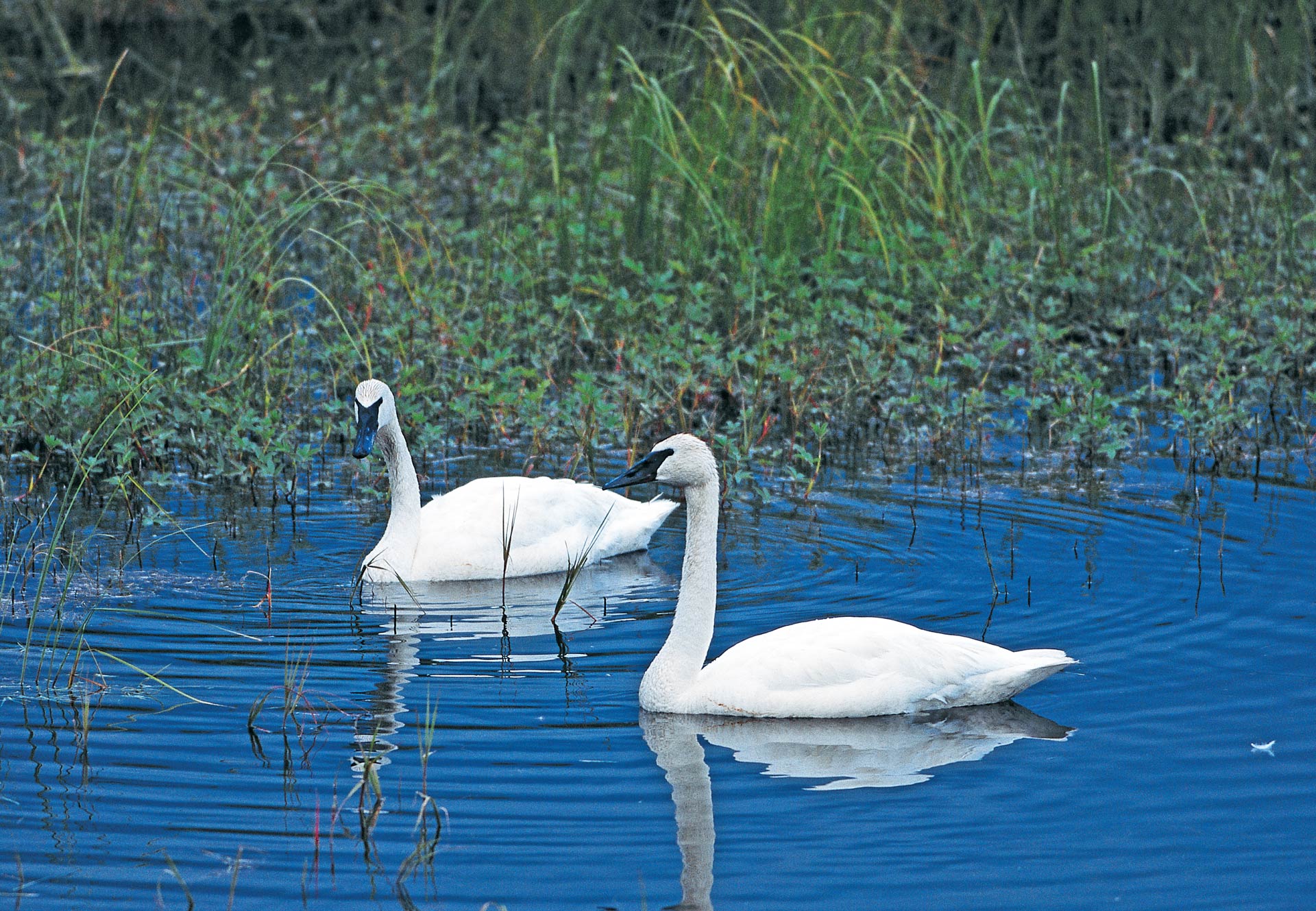 There is a great, largely unappreciated conservation story in the area east of Tumbler. The eastern half of the Tumbler Ridge Global Geopark plays a part in it. And Darryl Kroeker, Head of Conservation Programs for Ducks Unlimited Canada, BC Peace Region, is helping us tell it and helping our Global Geopark with a lot more to boot.

Trumpeter Swans once nested across much of northern Canada and Alaska. In the early 1900s they were driven to the brink of extinction. It was thought that they had been extirpated from Canada, but a small breeding population was then found near Grande Prairie.  A protected area was established and the great comeback began. Breeding was first documented in British Columbia in 1976, and in 1981 sixteen breeding pairs were noted in the Peace Region. A 2005 survey by Ducks Unlimited and the Canadian Wildlife Service estimated the total British Columbia population at 1126. Our area is truly the Canadian heartland for this extraordinary story of recovery.

There are now probably over two dozen breeding pairs on secluded lakes in the eastern portion of the Tumbler Ridge Global Geopark. The eastern end of Long Lake provides one of the easiest places from which to observe them, at the end of the hiking trail built and maintained by the Wolverine Nordic and Mountain Society.

Darryl Kroeker and biologist Mark Phinney have provided much useful information that is being used for trailhead and trailside signage for this trail, featuring the swans which can often be seen here.

Trumpeter Swans are sensitive to loud noise, boating and human disturbance, which can cause abandonment of nesting areas. Fortunately the suitable lakes within the Tumbler Ridge Global Geopark have minimal if any such disturbance, and continue to provide important breeding habitat for this magnificent species, the largest waterfowl in North America.

Darryl’s assistance through Ducks Unlimited Canada goes much further, though. Signs are being provided for other wetland localities, and this reaches its height at Bullmoose Marshes. In 2012 the trail to this wetland site just off Hwy 29 (25 kms from Tumbler Ridge) was board-walked with $60,000 of funds obtained when Tumbler Ridge was the provincial winner in the BC Walking Challenge. At that point Darryl provided student labour for the project and a cash donation. Prior to that DU had helped enhance this wetland, by providing nestboxes and “Baker’s Island”, the floating island off the viewsite that now supports nesting Canada Geese (named after pioneer local ornithologist Brian Baker).

Now Darryl and DU are going one step further, helping with large colour signs that will further enhance this trail and inform visitors about this attractive wetland and the birds and other creatures that inhabit it.

These wetland sites illustrate how sites within the Tumbler Ridge Global Geopark do not necessarily need immediately apparent surface geology in order to be relevant and worth celebrating: these wetland sites are often there as a result of the fairly recent Ice Ages, which provide a fascinating story, which is further developed by the kind of ongoing partnership we are seeing with Darryl Kroeker and DU, and for which we can all be very grateful.