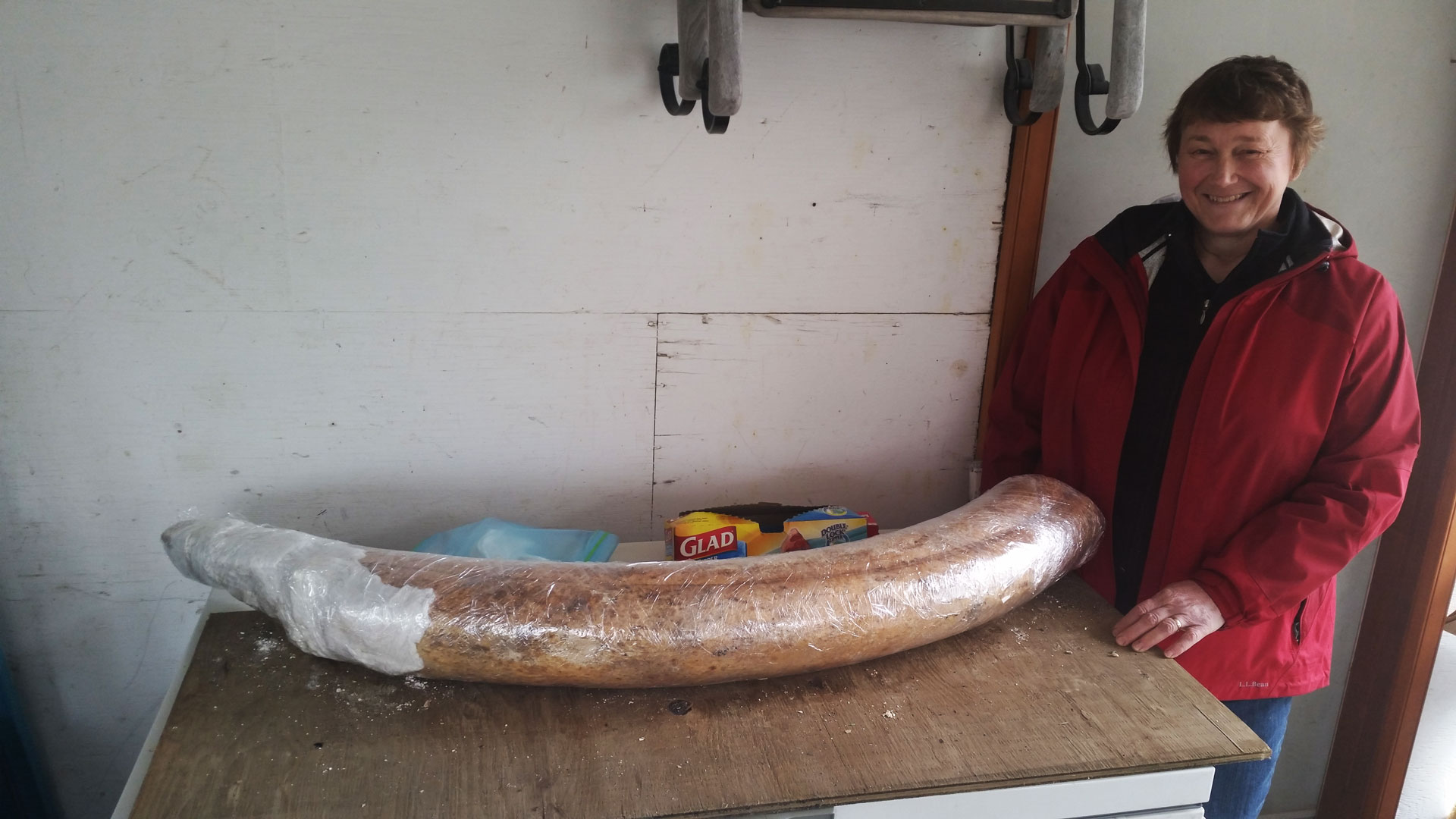 The Peace Region Palaeontology Research Centre (PRPRC) in Tumbler Ridge has a new star acquisition: a mammoth tusk, unearthed at the end of April in an ancient Pleistocene river channel in the North Peace region of British Columbia. The tusk, weighing over 25 kilograms and almost two metres in length, was generously donated by its discoverers Tom and Thelma Ostero, with the support of the Treaty 8 Tribal Association and local government.

It is in an excellent state of preservation, except for at its end, where a number of loose pieces will soon be added and fixed in place by museum staff in jigsaw puzzle fashion. In the meantime it has been protected from further degradation, prior to being stabilized in the long term. Left alone, such specimens flake off and lose their integrity once exposed to the elements, and can fall apart from the inside out.

Placing the tusk in the PRPRC allows Collections Manager Lisa Buckley and her qualified staff to handle and protect the specimen appropriately, and to make a number of replicas that can be prized and exhibited elsewhere. Arrangements will also be made for carbon dating to be performed.

Karen Aird, the Cultural Heritage Advisor for the Treaty 8 Tribal Association and the Tse’K’wa Heritage Society, was the first to bring the find to the attention of the PRPRC scientists, and commented: “The tusk was found in close proximity to the recent find of a prehistoric horse bone dating to 30,000 years ago. Both of these finds are near the Peace River and are yet another indicator of the rich and diverse history of the region and Treaty 8 Territory. Our First Nation communities have many oral traditions describing the Giant Animals, but there is little scientific baseline data. Right now, with all the major projects in the region, including the proposed Site C Dam, there is an immense and urgent need to further gather, understand and protect this ancient heritage.”

Rich McCrea, Curator of Palaeontology at the museum, expressed his appreciation for the donation: “I am gratified by the general good-heartedness of people from the Peace Region. The donors’ primary concern was for the proper long-term care of this significant fossil specimen. That kind of attitude makes it a privilege to work as a palaeontologist in this region and help display and promote its proud geo-heritage, which has few equals in the world.”

The tusk is destined to be a prime exhibit in the Dinosaur Discovery Gallery in Tumbler Ridge, as part of an Ice Age display that will include the recently repatriated 12,400 year old Tumbler Ridge bison skull. A number of mammoth tusks and teeth have been unearthed in the Peace Region over the past century, including from Hudson’s Hope and Taylor. The estimated ages of these specimens range from 40,000 to 10,500 years. It is a haunting, evocative concept that this “American elephant” may have co-existed with and been seen by some of the first human occupants of the land, such as at the remarkable Tse’k’wa site near Charlie Lake.