The Dinosaur Autobahn – A Personal Perspective 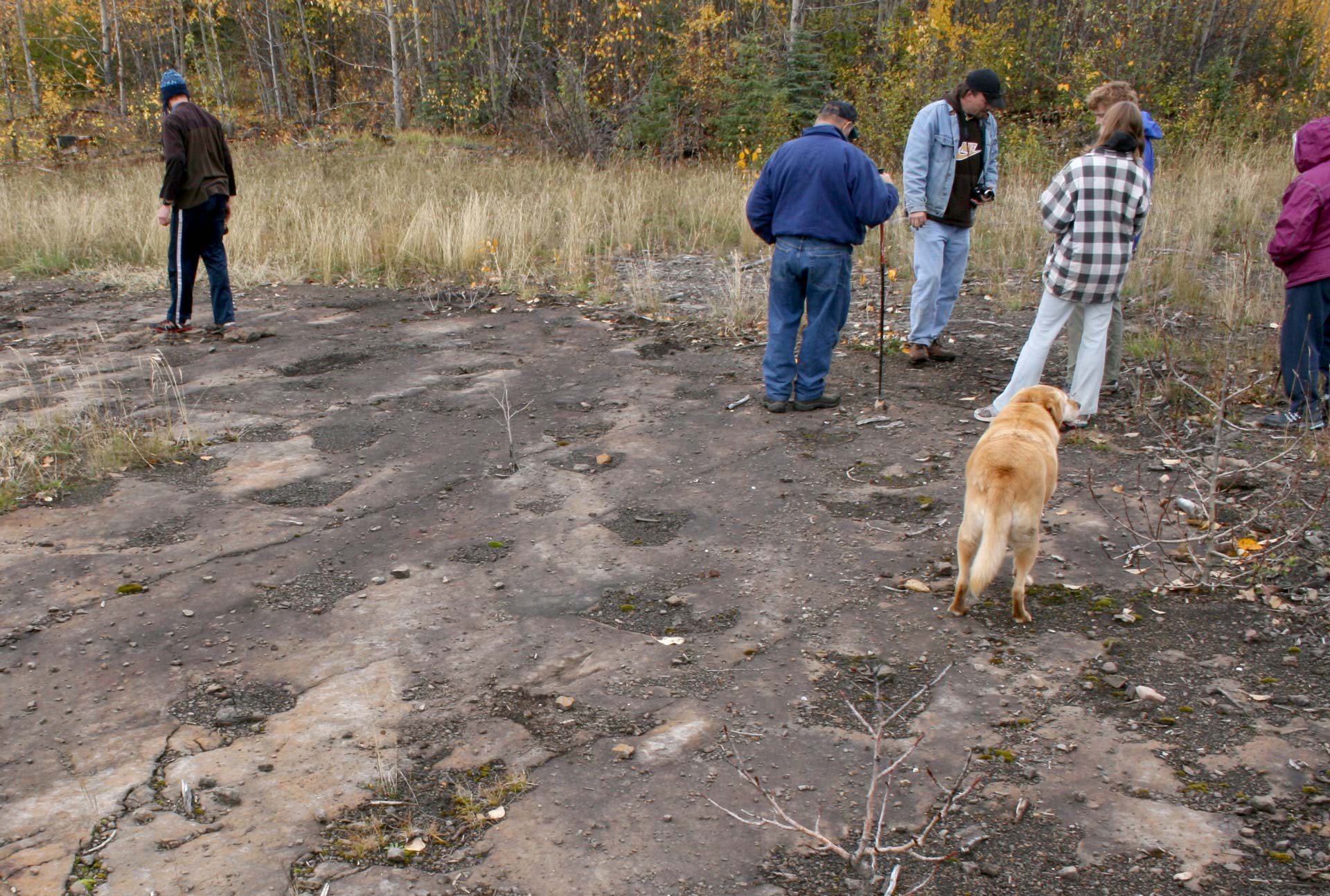 In recent weeks a Canadian Press article by Dirk Meissner on the so-called “dinosaur autobahn” near Williston Lake made the national news  The media found the description of multiple dinosaur trackways on a large flat surface area irresistible, and the story spread across the world. This is truly a phenomenon for everyone in northeastern BC to celebrate and take pride in.

How did we reach this point, where such an announcement could be made? The chain of events is tenuous but unbroken. It takes us back to the summer of 2010, when my son Daniel was working as Gallery Host in the Dinosaur Discovery Gallery in Tumbler Ridge. Gallery hosts, in interpreting the exhibits to visitors, are accustomed to reports of dinosaur eggs which turn out to be concretions, dinosaur bones which turn out to be fossilized wood, and dinosaur footprints which turn out to be erosional features. Not everything that looks like a dinosaur is a dinosaur.

Sometimes, however, the reports are genuine. Daniel had a hunch that what Barry Mireau was telling him was the real thing, and he called me over lunch to say that that there was this guy with him who was talking about lots and lots of dinosaur tracks in the Peace Region. Daniel thought that I should come and chat with him too.

Our palaeontologists Rich McCrea and Lisa Buckley were out of town, so I hurried up to meet Barry. (My patients have come to understand that fossil emergencies like this mean they may have to wait a few extra minutes to see me.) Barry was clearly the “real thing”. He not only had a good story to tell, but he had photos to prove it, clearly of dinosaur tracks. We changed our weekend plans and made arrangements for the Helm family and in-laws to meet Barry and be taken to the site.

It was a long, dusty drive, till finally Barry pulled over, and asked us to get out and walk  with him. What he showed us was spell-binding. By this time I had seen enough of dinosaur tracks to know this this was potentially one of the top sites in the world. Not only were there multiple tracks and trackways of variable size and shape, but there was the potential, with simple tools like shovel and wheelbarrow, to extend the size of the rock exposure substantially. A bit of math allowed for a conservative estimate of over a thousand tracks if the clearing could be done. A few photos later, and having taken a GPS reading, we returned to Tumbler Ridge feeling stunned and overwhelmed, wondering how to carry the responsibility of this knowledge forward and constructively release the obvious potential of the site.

We reported this to Rich and Lisa on their return. As it happened, representatives of the provincial Fossil Management Framework were visiting Tumbler Ridge the following week, and a chopper trip was hastily organized. I have never hoped so hard that my GPS device had delivered an accurate reading, as that is all they had to go on, plus my and Barry’s word that this was worthwhile. I did my usual pathetic second-guessing and worried that I was wasting their time and the museum’s money. I need not have worried: they landed right on the site and came back with rave reviews.

Since then, we have reported the existence of this site to the Peace River Regional District (PRRD) a number of times, so it is not really a new story. What grabbed media attention now is that 2015 is the year in which, finally, the initial work may be done on the site. Rich McCrea has assiduously been making presentations to various regional and municipal government bodies in the North Peace, explaining the plans and requesting letters of support. The wonderful example that the PRRD has shown in providing funding to the Tumbler Ridge Museum Foundation and its research program is a notable contributing factor to the process.

There are other intriguing twists to the story. In the 1920s Charles Sternberg described exquisite dinosaur trackways in the Peace Canyon. These came to be viewed as one of the top ten sites in the world. During the creation of Dinosaur Lake and Williston Lake through the building of the big dams, these were inundated. BC Hydro and others arranged for replicas of the most important tracks to be made, and for some to be salvaged and sent to reputable museums. A lot of people worked hard to achieve this, but the reality was that the sites were under water, the research was done from outside the province of BC, and the specimens followed the researchers.

Due to the perspicacity of Barry Mireau, and his willingness to share his find with the scientists in Tumbler Ridge, all that has changed. Amazingly, the new site appears to harbour similar tracks to those that are now submerged, and to be of equal quality and number. The new site, although close to Williston Lake, is not at risk of inundation. As a result, we have a second chance to get this right for the Peace Region and BC, and to celebrate our distant heritage. And whereas previously there was no-one in BC with the will or the expertise to deal with the tracks, the scientists of the Peace Region Palaeontology Research centre in Tumbler Ridge have become internationally renowned, and with adequate funding can tackle this megaproject.

Once the research is complete at the site, a permanent structure could be erected over it, allowing visitors to enter at all seasons and times. Many world famous dinosaur footprint sites are on steeply tilted rock layers. The Williston Lake site is tilted at a mere one degree to the horizontal – tailor made, it would seem, for interpretation and visitation. Combined with the attractions of the Tumbler Ridge Global Geopark and the Philip J. Currie museum in neighbouring Alberta, the scene would be set for  a world class Northern Dinosaur Tour.

What I tell the politicians and potential funding sources is this: we really don’t know what the price of coal or oil will be in, say, fifty years from now, or how these resources will be used then – we can only guess. But I am willing to bet that people then will still appreciate their heritage and will want to learn about the distant past and be enchanted by walking in the footsteps of the dinosaur autobahn. It is quite possible that this site becomes the feature for which the North Peace becomes internationally renowned, and drives a substantial part of the economy.  That is an entrancing thought. We are still faced with the responsibility of doing justice to this amazing discovery, but the groundswell of interest and support is growing. Hopefully funding sources will realize this unique opportunity to see into the future and to contribute positively to that future.