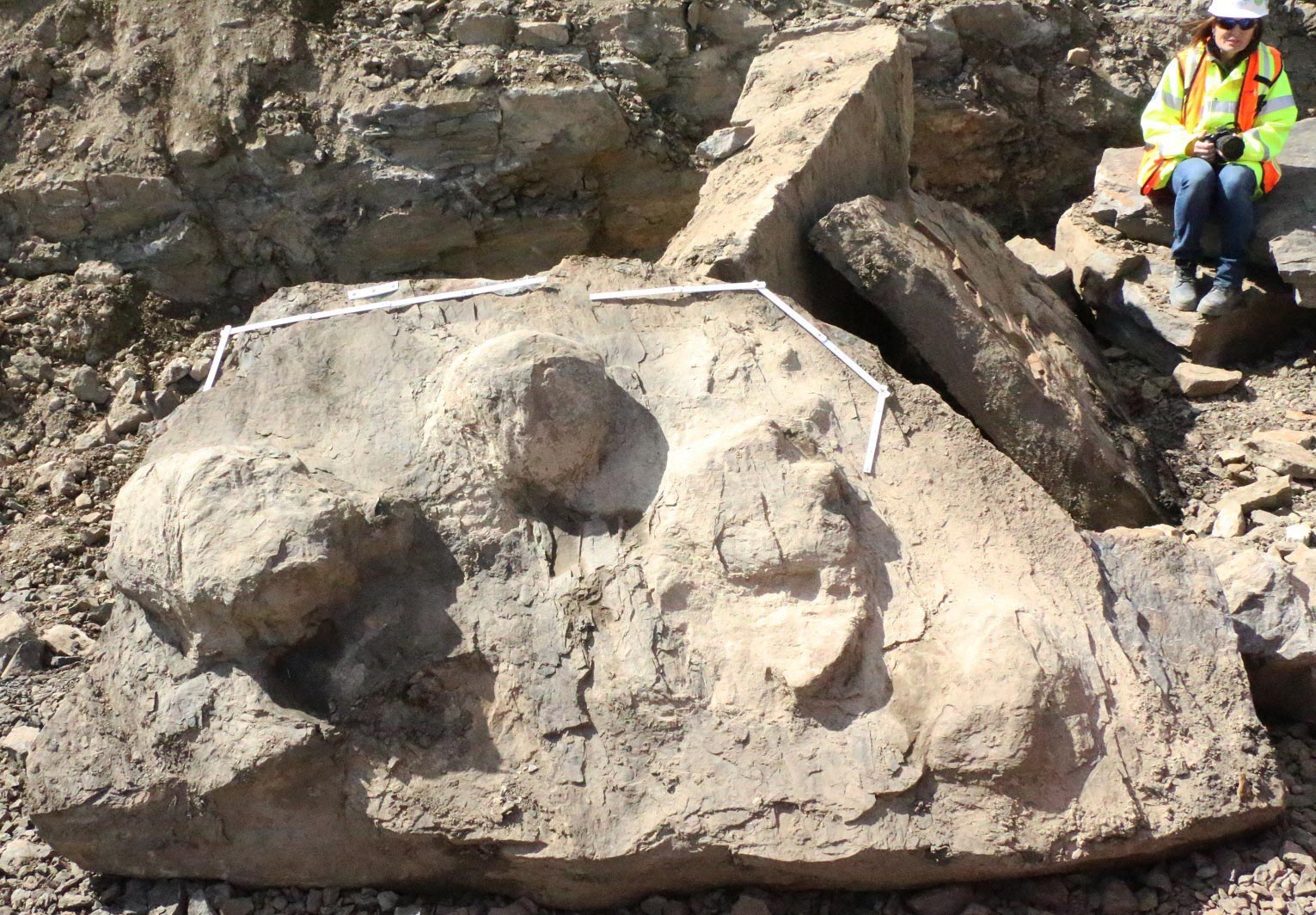 97-million-year-old tracks uncovered by equipment operator, to be preserved in Tumbler Ridge Museum

Warren Garbitt of Moberly Lake is an excavator operator with 4Evergreen Resources Inc. Whenever he works in an area after a blast he is on the lookout for items of interest. He picks through as he clears the area. If he finds something unusual, he pushes it aside with his bucket. When he saw a bumpy slab in late July while working at Pattern Development’s Meikle Wind project site, he was pretty sure it was something important, so he reported it.

It was indeed significant – natural casts of a rare type of ankylosaur (armoured dinosaur) trackway, in 97 million year old rocks of the Dunvegan Formation. The depth alone of these dinosaur tracks makes them impressive.

Rich McCrea, Curator of Palaeontology at the nearby Tumbler Ridge Museum and Peace Region Palaeontology Research Centre (the only facility of its kind in British Columbia) explains:

“This find is particularly significant because of one deep footprint with three visible digit impressions. The first ankylosaur tracks described from Canada had four obvious digit impressions, however we have encountered a number of three-toed morphs which we are currently describing in the scientific literature. This find then adds to the small, but growing population of three-toed ankylosaur tracks.”

Pattern Development has set an impeccable example in how it dealt with this find. As there is not yet appropriate provincial fossil protection legislation, the protocol for an archaeological discovery was followed: the site superintendent was contacted, who in turn contacted the independent environmental monitor and owner representative. A visit to the site ensued. The area was barricaded to prevent further disturbance and the Project archaeology consultant and Environmental Manager were contacted, after which the scientists at the Peace Region Palaeontology Research Centre were informed and were able to visit the site.

Pattern Development has offered to move the trackway to the museum for eventual display. As the province of British Columbia moves towards implementing its fossil management framework, the constructive relationship between industry and science in the Tumbler Ridge area is an impressive beacon.

“Unearthing this special find has brought a lot of excitement to the construction of BC’s largest wind power project,” said Michael Thompson, Pattern Development’s Project Manager at the Meikle Wind Energy Project. “We look forward to delivering it to the Tumbler Ridge Museum Foundation where it can be preserved and studied, adding to the long-term funding commitment we have already made to the foundation.”

Tumbler Ridge Mayor Don McPherson commented: “Once again the Tumbler Ridge Museum Foundation has made another exciting discovery. It seems every month a new trackway or bone is discovered! I’m just happy to be along for the ride. I also want to thank Pattern Development and Borea Construction for working so well with our local community and sharing this trackway with the world.”

These ankylosaur tracks are the latest in a series of remarkable fossil discoveries in the Tumbler Ridge area this summer. Others include exceptional crocodilian trackways, theropod footprints, some of the oldest dinosaur trackways yet discovered in the region, three large three-dimensional Triassic coelacanth skulls, and the most complete thalattosaur skeleton ever found in North America.

Partly in recognition of the area’s magnificent fossil record, the Tumbler Ridge Geopark was admitted to the Global Geoparks Network, supported by UNESCO, in 2014. One of 111 Global Geoparks worldwide, it is one of only two in North America and is the first in the west. Pattern Development has committed to donate $100,000 over 20 years to the Tumbler Ridge Global Geopark. This donation was announced in early July as part of the Meikle Wind Community Benefits Program.

It appears that the potential is high for finding many similar track slabs as the Meikle Wind project progresses. Follow-up discoveries have already been made. This creates exciting long-term exhibit possibilities for the Tumbler Ridge Global Geopark, and may create yet another compelling reason for tourists to visit the area.