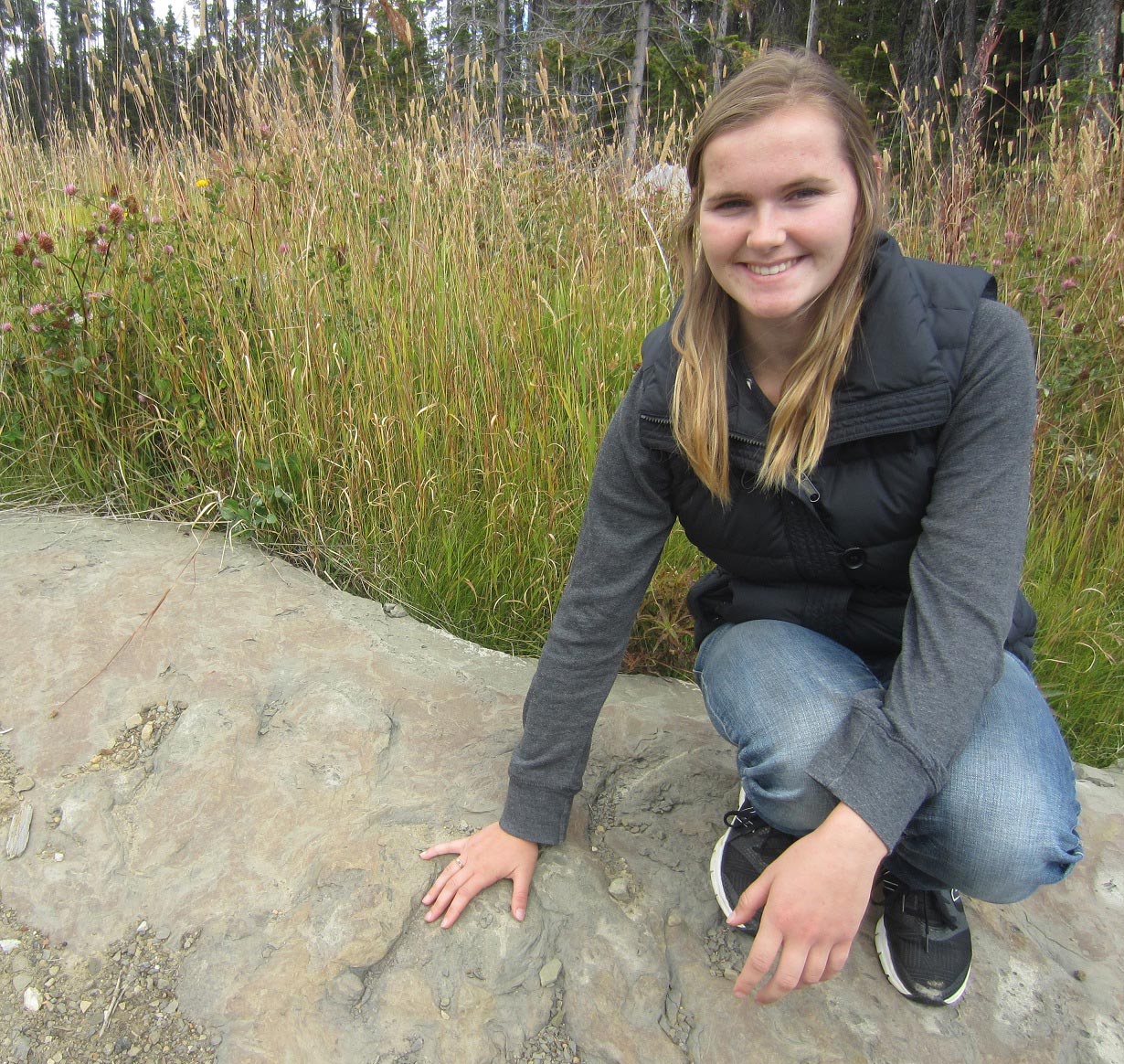 There are fourteen tyrannosaur tracks that have been discovered worldwide. No less than nine of these have been found within the Tumbler Ridge Global Geopark, while there are three from Alberta, one from Mongolia, and one from New Mexico. Some of the first to be discovered within the Geopark are of great international significance and include the only known tyrannosaur trackways in the world. However, these are in remote, difficult-to-access locations, over seventy kilometres from town. By contrast, the track that Carina Helm discovered on August 30th is less than ten kilometres from Tumbler Ridge, and is easily accessible and potentially recoverable.

Carina, who is studying Geography at UBC, explains how she discovered the track: “My Dad and I were returning in the evening from repairing boardwalks on one of the hiking trails, when I told him I knew of some big exposed rock slabs. We worked out that these were maybe from an age that could feature dinosaur tracks, so we decided to make a detour to have a look. The very first rock I went to, right beside the road, had this huge track-shape on it with three toes. I thought, ‘Surely that is too big to be a footprint?’ but I showed it to my Dad and next thing he was on his cell-phone to Rich McCrea telling him about the find.”

The day after the discovery Rich McCrea and Lisa Buckley, palaeontologists at the Peace Region Palaeontology Research Centre (PRPRC) in Tumbler Ridge, were able to visit the tracksite, and concluded that the footprint was made by a tyrannosaur (most likely one similar to Albertasaurus). The length of the footprint measures 59 cms, but it was once even longer, as the tip and claw of the longest toe have been eroded away.

McCrea explains: “It can sometimes be a challenge to identify the maker of a single print, especially one that has been weathered by the elements. Even with the tips of the digits (the claw impressions) eroded away, the footprint found by Carina Helm still possesses characteristics that make it identifiable as the product of a meat-eating (theropod) dinosaur. In addition to the morphological features of the footprint, which bears great similarity to the ones discovered in the fall of 2011 by Mr. Aaron Fredlund (subsequently named Bellatoripes fredlundi), the size of the print and the age of the rocks it was found in provide further evidence that the track-maker was a tyrannosauroid.” (British Columbia’s first tyrannosaurid tooth was discovered in the same general area by McCrea in 2004.)

Jim Kincaid, President of the Tumbler Ridge Museum Foundation (TRMF), commented: “Thank you, Carina.  It is people like you who make our operation so successful.  Your sharp eyes and enthusiasm for preserving our fossil heritage continue to contribute to the growth in importance of the TRMF fossil collection.”

The Tumbler Ridge tyrannosaur track creates a conundrum for the TRMF: promoting it as a roadside attraction seems attractive, but it would be almost certain to get vandalised or stolen. Yet the rock slab is extremely heavy and bringing it into the Museum would pose logistical problems. Regardless, the first steps are to get it properly documented with 3D digital photogrammetry and casting.

Curiously, it was a day of dinosaur footprint records for Carina. The same day she made the discovery of this large footprint, she had been part of the team that discovered  the smallest dinosaur track yet encountered in the region, measuring just six cms in length. The day capped a good summer of exploration for her, as she discovered two dinosaur trackways in a Tumbler Ridge canyon in much older rock layers in July. One of these is highly enigmatic and is awaiting a field visit by the PRPRC scientists. Carina concludes: “It is exciting to be able to contribute to science and the Geopark in this way.”