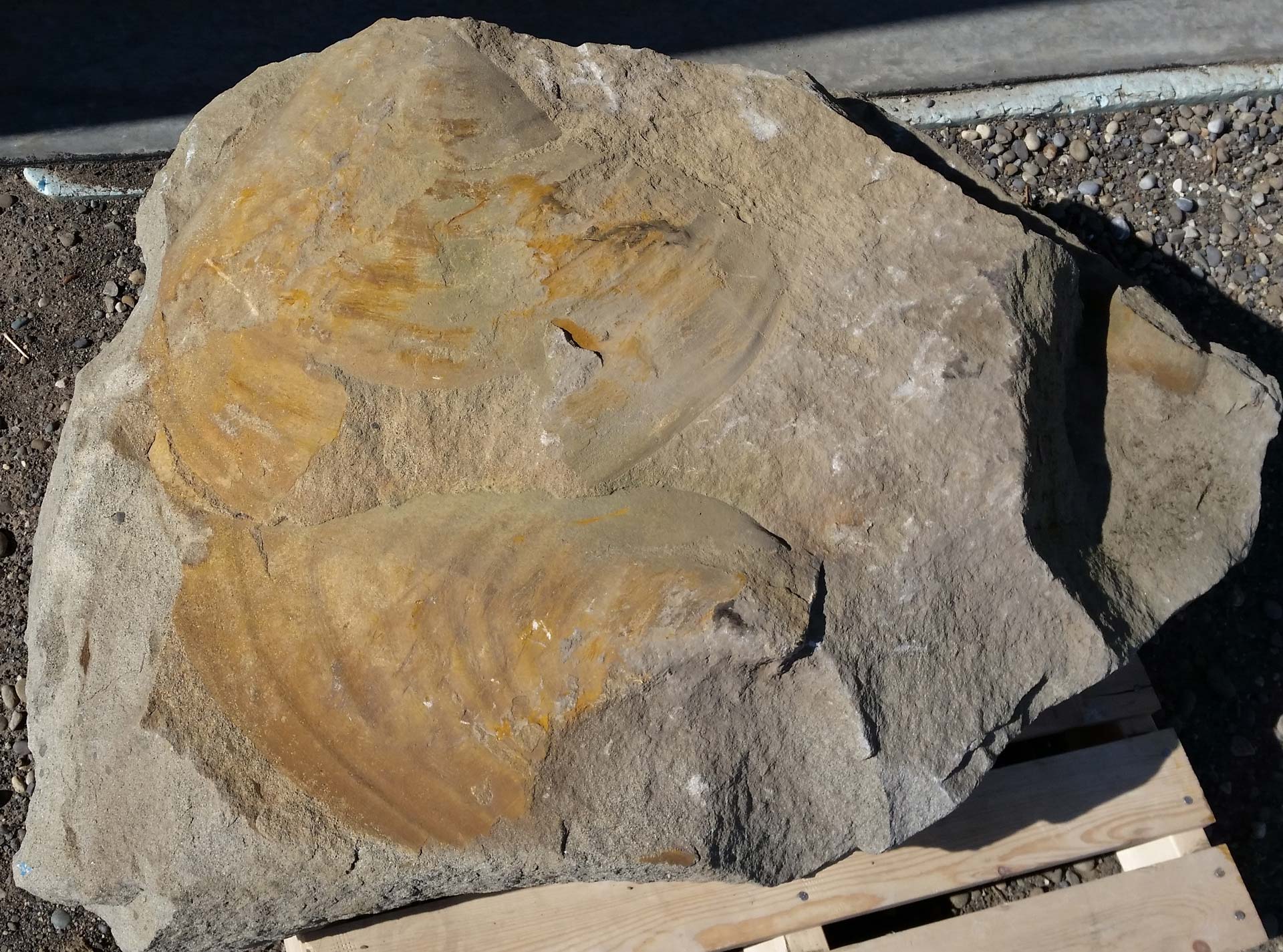 Sarah Gamble and Kaitlin Minichiello, archaeologists with Amec Foster Wheeler in Tumbler Ridge, have been conducting the archaeological impact assessment for Boralex’s proposed Redwillow Wind Energy project 50 kilometres southeast of Tumbler Ridge. They look for evidence of past human use of the area, such as prehistoric First Nations sites or historic trapper cabins, not for fossils. But they keep their eyes open, and when they see something unusual, they know what to do.

So when they found first what appeared to be giant clams in a roadside cut, then remarkable shapes of trace fossils on rocks in a nearby quarry, they took photos, took a GPS reading, and called the palaeontologists at the Peace Region Palaeontology Research Centre (PRPRC) in Tumbler Ridge.

The photos were compelling enough to precipitate a site visit a few days later, where the archaeologists and their team members showed the palaeontological team what they had found. By the end of the day the PRPRC’s shop crane had been employed to bring the first heavy specimens back to the museum, where they will be prepared and made ready for exhibition.

The giant clams, two thirds of a metre long, are known as Inoceramids, and used to inhabit marine environments 90 million years ago in what is now the Tumbler Ridge area. They lie in the Late Cretaceous Cardium Formation of rocks. Other such clams have been found in the region, including in Flatbed Creek just below town, but these are by far the best preserved and the most suitable for display. The burrows on the nearby rocks, traces made by invertebrate creatures, are likewise splendidly preserved, and provide material for what will become another exhibit in the Dinosaur Discovery Gallery in Tumbler Ridge.

Kaitlin Minichiello commented: “As archaeologists it becomes second nature to pay close attention to our surroundings, we are always looking out for something unusual that might catch our eye! Giant clams are not something we tend to come across in our everyday work and it is great that they will be seen and shared with the community. We concentrate on what is really such a small window of time in the history of life on this planet, so it has been exciting to be able to learn more about the extensive history of this area and the great work that the local palaeontologists do. We really do live in a wonderful time capsule here in Tumbler Ridge and I am thrilled to have been a part of this.”

Sarah Waters agreed: “This find certainly added an interesting aspect to our archaeological investigation, and I sometimes wonder what past people thought of the fossils they surely found. It’s exciting to be a part of the bigger scientific community of the Tumbler Ridge Global Geopark, to know that there are great finds just laying out in the open, waiting to be discovered, and that anyone who lives and works in the area can contribute to our understanding of the ancient Tumbler Ridge landscape by reporting these fossil finds to the PRPRC.”

Rich McCrea, Curator of the Tumbler Ridge Museum, added: “The Peace Region is fortunate to have such a sophisticated and knowledgeable network of people (volunteers, tourists, industry workers, consultants, etc) that are on the lookout for interesting and unusual features in the area. These people know what to do when they discover fossils, and in this case the PRPRC can now add a different facet of the prehistoric record of life from this region that will eventually be available at the museum for everyone to enjoy. Further, the locality that possesses a large diversity of invertebrate traces is a prime candidate for a new interpretive geosite destination within the Tumbler Ridge Global Geopark.”

Equally happy to be a part of this contribution to the scientific knowledge of the area and to the Tumbler Ridge Global Geopark is Boralex. Alistair Howard (Director, Project Development) commented:  “Archeological work plays an important role in the early stages of a project.  The information collected in the field by scientists like Sarah and Kaitlin allows us to design and (hopefully) eventually construct our project with the smallest possible impact.  It’s not very often that something as interesting as a prehistoric fossil is found and we look forward to working with PRPRC and others in Tumbler Ridge as we develop the project.”

With people like Sarah and Kaitlin on the ground exploring in such remote, previously unexamined localities, many more exciting finds can be anticipated, and the positive relationship between the Tumbler Ridge Museum and regional industry can be expected to flourish.