The trail to the Bald Spot climbs relentlessly, gaining 225 metres in about a kilometre, then swinging left to an excellent viewpoint at the upper end of this distinctive landmark.

The constant gradient makes it a favourite for runners training for the Emperor’s Challenge.

The Bald Spot makes for a unique viewing experience for the July 1st fireworks. Just remember to bring a flashlight, as it is steep and dark on the way back down.

The trail up to the Bald Spot ascends what is now known as the Tumbler Ridge.

This was not initially the case. A 1919 map by J.C. Gwillim denotes “Tumbler Range” as the long ridge to the northwest of here, culminating in Mt Bergeron and the Bergeron Cliffs. On a map by Edmund Spieker a year later in 1920, the term “Tumbler Ridge” was used for the first time.

Somehow, over time, that use lapsed, and when the town of Tumbler Ridge came into being in the 1980s, maps showed the lower ridge east of the community as the “Tumbler Ridge”.

The name apparently is derived from boulders tumbling down the slopes, probably below the Bergeron Cliffs, that were noted by early explorers.

Why is the Bald Spot Bald?

Seen from a distance, the western slopes of the Tumbler Ridge comprise a series of shallow valleys separated by rounded hills. The centre of each of these rounded slopes has less vegetation than the surrounding areas, and the valleys are cloaked in thicker forest. The Bald Spot is the biggest and most obvious of these less-vegetated areas.

These differences are explained by the aspect and steepness of the slope. The valleys are sheltered from direct sunlight, allowing for a moist microclimate that supports dense spruce forests. The steepest, most sun-exposed areas like the Bald Spot are much drier and do not support trees.

Golden Eagle Migrations in the Fall

If it is a late-snowfall year, the Bald Spot is also an excellent place from which to watch the fall Golden Eagle migration, which reaches its peak in late October and early November.

Over 6,000 birds make this trip each way along the eastern slopes of the Rockies every year, between breeding grounds in the low Arctic and wintering grounds in the eastern Great Plains of the USA. This remarkable Canadian phenomenon was only discovered in 1992. On a good day over 100 birds can be seen, gliding at speeds of over 120 kilometres per hour.

On the horizon lie the Hart Ranges of the Rocky Mountains. The summit of Mt Reesor the flat-topped bulk of Mt Spieker, and Bullmoose Mountain form prominent landmarks to the west. To the southwest lies part of the old Quintette Mine. Further to the south are Mt Roman (site of the Peace River Coal Mine), and Mt Babcock (site of the Emperor’s Challenge Mountain Run).

Within the Tumbler Ridge Global Geopark, rock layers generally follow an orderly pattern, with older rocks occur in the southwest and younger rocks in the northeast. The bedrock of the Tumbler Ridge, like that of the Bergeron Cliifs, is about 95 million years old, from the Cretaceous Period (Kaskapau Formation). The rocks that form the mountains on the horizon are also from the Cretaceous period, but are significantly older, and mostly from the Gates Formation, over 100 million years old. These rocks contain the metallurgical coal deposits that have supported the Tumbler Ridge economy since the 1980s. 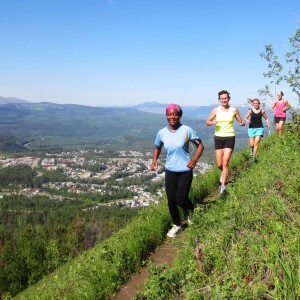 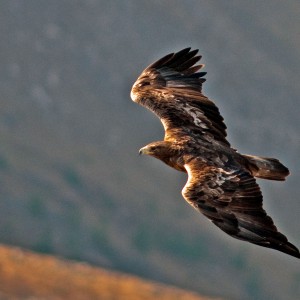 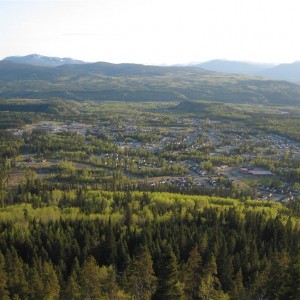 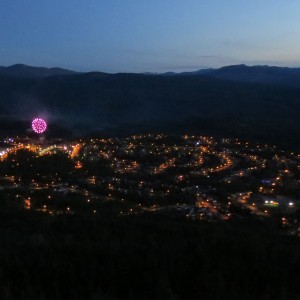 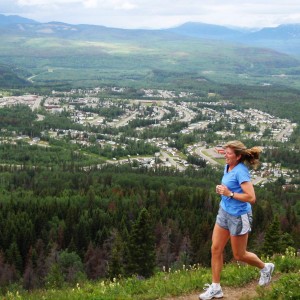 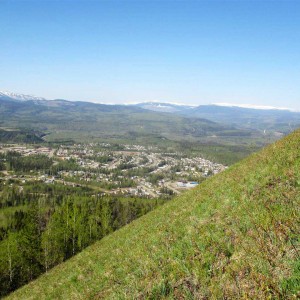 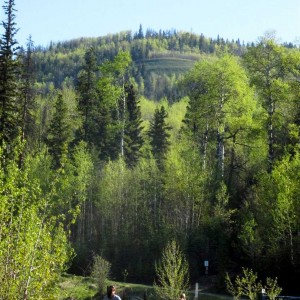 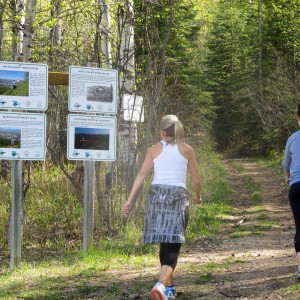